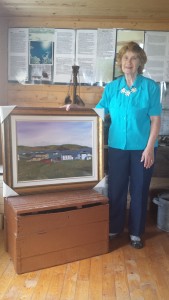 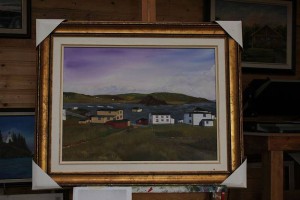 Thank you to Cal Warren for donating the picture and to everyone who bought tickets.

Cal kindly told us this when donating the painting

“It is with great pleasure that I donate this painting to the Heritage Group of Champney’s West.  During resettlement we moved from our home in Fox Island to Isle aux Mort’s.  This painting relates my memories of that era and is inclusive with the beauty of that area of Newfoundland and Labrador.  I give willingly and freely and strongly suggest that you support this small group in their effort.”    Cal Warren 2015

This painting was inspired by a small black and white photograph taken in 1964 or 1965.  Local residents have shared their recollection of the colours of the homes and other details.  The home being towed is on its way from Traytown to what is now called, Champney’s Arm.  It was the home of Max and Dolly Cooper.   Dolly had refused to move unless she could take her home.  The house had to be brought over a hill, down a cliff and floated to Champney’s Arm.  The boats towing the house belong to Gus (Augustus) Pippy, William Watton, and Max Cooper.  The house now belongs to Brenda (Toope) VanTent, Max and Dolly’s niece.

The funds raised will be used to assist in the preservation and promotion of the cultural heritage of the community and the relationship with marine ecology through the development and operation of educational facilities.